One of the most recorded conductors of a generation, José Serebrier has performed with the English Chamber Orchestra on many occasions during his glittering career as a conductor, and in anticipation of the Orchestra’s long-awaited return to touring in the United States, Serebrier conducts an exciting programme of great classics culminating in Haydn’s Symphony No. 49, ‘La passione’.

This is an opportunity to hear Serebrier’s sumptuous arrangements of two great Tchaikovsky pieces, the Andante cantabile from String Quartet No.1, and the melancholy ‘None but the Lonely Heart’, one of six pieces originally for voice and piano.

Maestro Serebrier features also as a composer in his own right: Windance is a one-movement homage to the great Manuel de Falla.

Written at the same time as Tchaikovsky’s ever-popular 1812 Overture, his Serenade for Strings is a reflective and graceful work that has been ever-present in the classical canon since it was written.

Discounts (not available online):
Friends of ECO: 20% off
Senior Citizens & Students: 10% off 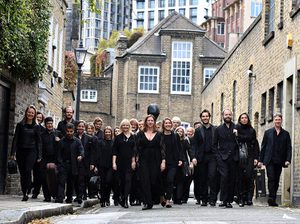 One of the most recorded conductors of a generation, Jose Serebrier conducts an exciting programme including Tchaikovsky's Serenade for Strings and culminating in Haydn's Symphony No. 49, 'La passione'.

Stephanie Gonley directs a programme of rarely performed multi-hand works for piano and orchestra with the renowned MultiPiano Ensemble, plus Mendelssohn's much-loved Symphony No. 4, 'Italian'.

Roberto Forés Veses returns to conduct the ECO in a powerful programme featuring Beethoven's Third Symphony, the 'Eroica', with a first half combining works composed by Butterworth, Delius and Ravel.

This concert, featuring Louise Farrenc's Symphony No. 2, Haydn's Trumpet Concerto and Schubert's Symphony No 5, has the grace and elegance of a Georgian spa town and tunes that you'll be humming all the way home.
More Info Book Now

The Royal Philharmonic Orchestra and presenter Petroc Trelawny treat you to a Valentine’s night to remember, featuring some of the most romantic pieces of music ever written, from the worlds of film, opera and classical music.
More Info Book Now
Limited Availability