The great symphonic soundscapes of Tchaikovsky’s orchestral music is closely tied to the theme of ‘Fate’, and the full emotional weight of this motif is heard at its strongest in his Symphony No. 5. Composed ten years after his Fourth Symphony and, despite the composer’s own doubts, it displays Tchaikovsky’s brilliant orchestration and his ability to weave in the folk songs of his homeland, culminating with the ultimate triumph of hope in the explosive final movement of the Symphony.

Shostakovich’s Second Violin Concerto, performed by soloist Alena Baeva, is reflective of the composer’s music from his later life. The violin takes a confessional and understated tone for much of the piece, and in the instrument’s solo cadenzas the Concerto becomes engulfed in questions of mortality.

‘Baeva was a magnetic presence, and the sound of her instrument, the fullness of tone, and her marvelously precise intonation were admirable and beautiful in and of themselves.’ (New York Classical Review) 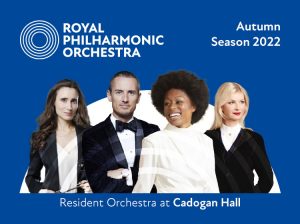 The Royal Philharmonic Orchestra’s opening concert of its 2022-23 season at Cadogan Hall stars Isata Kanneh-Mason, who plays Clara Schumann’s rich and melodious Piano Concerto in her first performance as the Orchestra’s Artist-in-Re...

The great symphonic soundscapes of Tchaikovsky’s orchestral music is closely tied to the theme of ‘Fate’, and the full emotional weight of this motif is heard at its strongest in his Symphony No. 5. Composed ten years after his Four...

Tonight’s concert features two pieces steeped in the natural world. Dvořák was staying at his summer resort when he wrote his Eighth Symphony, and you can hear the bird song and thunderstorms of a summer’s day in Bohemia in the beautifu...

Imagine yourself in a wintery wonderland as an evening of orchestral Christmas delights awaits you. Beloved ballet suites from Tchaikovsky’s The Nutcracker and The Sleeping Beauty are filled with glittering melodies, alongside another seasonal...

This much-loved concert of seasonal classics and sing-along carols returns to Cadogan Hall. Featuring all your favourite carols and festive music and songs such as O Come, All Ye Faithful, Hark! the Herald Angels Sing, Sleigh Ride, Let it Snow, Winte...

A Valentine’s night to remember, featuring some of the most romantic pieces of music ever written, from the worlds of film, opera and classical music – performed by the Royal Philharmonic Orchestra. Enjoy well-known themes from Gone with the Wind...