A moving performance of works which evoke the futility of war and destruction and the final concert in a series with the City of London Choir and the Royal Philharmonic Orchestra which explores the ground-breaking work of Ralph Vaughan Williams in a European context.

This concert pairs Vaughan Williams’ Serenade to Music with music by his teacher Ravel. Written in 1938, Serenade to Music has an atmosphere of shimmering contentedness that belies the prevailing tension of the time. In contrast Ravel’s Le tombeau de Couperin was written throughout the First World War and each movement is dedicated to a friend of Ravel’s who was killed in the conflict.

Storm clouds were already brewing in Europe in 1936 when Vaughan Williams wrote Dona nobis pacem, a powerful musical evocation of the destruction and death brought about through war and violence. A deeply affecting and dramatic work, it speaks vividly of the harshness and cruelty of war, and also captures the mood of its own time in an anguished, pre-emptive lament for what was about to come. As Simon Heffer puts it, Dona nobis pacem ‘confirms that this is now a composer whose main inspiration is drawn not from the soil of England, but from the whole world going mad around him’. The cantata ends on a note of reconciliation and hope transcending nations and borders, binding Vaughan Williams to humanity everywhere. 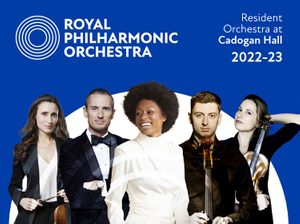 Elgar’s set of musical dedications is widely regarded as one of the greatest orchestral works of the 20th century. Shunta Morimoto (Winner of the Hastings International Piano Concerto Competition 2022) performs Beethoven's Piano Concerto No. 4.

The RPO presents an evening of Rhapsody, Romance and Fantasy

Who can mistake the thrilling, sliding, bluesy clarinet opening of Gershwin’s Rhapsody in Blue? Tonight, you can hear that fabulous piece alongside three other cutting-edge works. Looking for a follow-up to the huge success of Rhapsody in Blue, Ger...

The Chapel Choir of the Royal Hospital Chelsea and the Academy of Ancient Music return to Cadogan Hall to perform Bach’s dramatic Easter masterpiece, his setting of the St John Passion, with soloists Gwilym Bowen and Jonathan Lemalu.
More Info Book Now

Theme of the Sea

A concert on the theme of "The Sea" featuring the world premiere performance of Ian Fletcher's oratorio Jonah, as well as Mendelssohn's The Hebrides Overture, arias from Wagner's The Flying Dutchman, and two items from Gilbert & Sullivan's HMS Pinafo...
More Info Book Now