Coronavirus update: We respectfully ask all audiences to wear face coverings when visiting our premises and crucially, not to attend if you have tested positive for, or are showing symptoms of coronavirus, or if you have been asked to self-isolate. See our Coronavirus Updates & FAQs.

Past Event
Shoshana Bean Past Event

After more than a year of uncertainty and loss, this holiday season promises to be a light at the end of a dark time in history! Sing Your Hallelujah, Shoshana Bean’s holiday concert celebration, captures the spirit of connection, reflection and joy. With fresh interpretations of holiday classics and appearances by very special guests, this year’s concert honours the nostalgia and comfort of tradition while embracing new reasons to sing!

In 2018 and 2019, the Broadway star and Billboard No. 1 recording artist began a holiday tradition with her acclaimed, sold-out shows at Harlem’s world-famous Apollo Theater in New York City. In 2020, Shoshana returned to the iconic venue for a documentary concert event Sing Your Hallelujah, filmed during the height of the global pandemic and shutdown.

Shoshana Bean’s three independent solo albums have all topped the iTunes R&B and Blues charts in the US and UK, with her fourth and most recent project, Spectrum, debuting at No. 1 on the Billboard Jazz charts. She has sold out solo concerts around the globe, lent her voice to countless films and television shows, amassed millions of views on YouTube, and performed alongside Ariana Grande, David Foster, Postmodern Jukebox, Brian McKnight, and Michael Jackson.

Shoshana is a veteran of the Broadway stage having made her debut in the original cast of Hairspray, starring as the very first replacement for Elphaba in Wicked and most recently as Jenna in Waitress. She won a IRNE Award for her performance as Fanny Brice in Funny Girl and earned a Jeff Award nomination for her portrayal of CeeCee Bloom in the pre-Broadway musical production of Beaches. 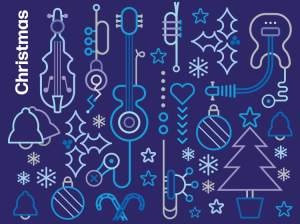 Welcome to Christmas at Cadogan Hall! From carol concerts to swing jazz and choral masterpieces, from festive orchestral music to musical theatre and sing-along rock & pop classics, you are sure to find something you'll enjoy.

Barts choir return for their first full concert in two years, featuring Bach’s Magnificat, originally written for performance in Leipzig at Christmas 1723. It contains some of Bach’s most virtuosic and exuberant music, including several s...

Guest vocalists Emma Hatton and Alex Gaumond join the RPO for this much-loved concert of seasonal classics and sing-along carols, featuring favourites including O Holy Night, Let it Snow, O Come, All Ye Faithful and I’ll be home for Christmas.

Toast the Christmas spirit with Charles Dickens and celebrate the very best of Victorian carols, classics and a selection of readings from Dickens’ A Christmas Carol. Recommended age: 7+

Maddy Prior and the Carnival Band

Renowned folk singer Maddy Prior joins us once again with the Carnival Band during the festive season for their unique celebratory show Carols & Capers. Together they mix renaissance, modern and ethnic instruments with a refreshing cavalier attit...

The Sixteen’s 2021 festive programme is centred around Bob Chilcott’s evocative and atmospheric double-choir ‘O’ antiphons. Anticipating the coming of Christmas, they were traditionally sung before and after the Magnificat on...

Sensational singing stars Kerry Ellis and Louise Dearman are joined by fabulous Musical Director Craig Adams at the piano and his four-piece band for a stunning night of show-stopping music as they take us on an unforgettable journey with classic so...

Back by popular demand and following sell-out performances across the globe, The Definitive Rat Pack brings you an evening of festive classics, including ‘White Christmas’, ‘Baby It’s Cold Outside’, ‘The Christmas...

Join The Bach Choir and special guests London City Brass for a magical evening of Christmas carols conducted by David Hill. Each year, the Choir treats Cadogan audiences to the perfect selection of carols both traditional and new – including the wi...

Now a regular highlight of Christmas in Chelsea, the Mozart Symphony Orchestra returns to Cadogan Hall for its annual performance of the timeless classic, The Snowman, for which the film is shown on the big screen with a live symphony orchestra provi...

with the Mozart Festival Orchestra & Chorus

A sublime concert of carols and seasonal classics staged in full 18th-century costume in an evocative candle-lit style setting, with readings by Peter Davison. Recommended age: 7+

With the Down for the Count Concert Orchestra

The Down for the Count Concert Orchestra presents a festive celebration featuring the music of Nat ‘King’ Cole, Billie Holiday, Judy Garland, Ella Fitzgerald and many more in a luscious 28-piece orchestral setting evoking the sounds of the great...

Clap your hands, stamp your feet and sing along! Rainer Hersch and his Orkestra are back with a spanking new treat – a jamboree of singalong rock and pop hits. Party atmosphere, comedy, music – absolutely the best way to welcome the New Year...

Sensational singing stars Kerry Ellis and Louise Dearman are joined by fabulous Musical Director Craig Adams at the piano and his four-piece band for a stunning night of show-stopping music as they take us on an unforgettable journey with classic so...
More Info Book Now

Barts choir return for their first full concert in two years, featuring Bach’s Magnificat, originally written for performance in Leipzig at Christmas 1723. It contains some of Bach’s most virtuosic and exuberant music, including several s...
More Info Book Now