Experience the emotional power of music as conductor Kevin John Edusei and the RPO bring to life well-loved orchestral classics alongside a lesser-known gem.

Coleridge-Taylor showed an early affinity for music and the melodic Ballade for Orchestra announced his composing career in style, receiving its premiere at the Three Choirs Festival following a recommendation by Sir Edward Elgar.

Roman Kosyakov, winner of the Hastings International Piano Concerto Competition, puts his own stamp on Rachmaninov’s passionate Piano Concerto No. 2 before the Orchestra embraces Beethoven’s expansive ‘Pastoral’ Symphony, inspired by his love of nature. 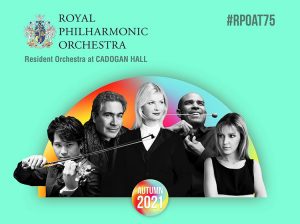 Join the Royal Philharmonic Orchestra at its resident home, Cadogan Hall, as it celebrates its 75th year at the forefront of music-making in the UK.

Join the Royal Philharmonic Orchestra, Resident Orchestra here at Cadogan Hall, for this opening concert of its 2021/22 series including Romantic masterpieces Tchaikovsky's Violin Concerto and Sibelius' Symphony No. 2.

A programme of enduring orchestral favourites including Tchaikovsky’s Piano Concerto No. 1, performed by Italian pianist Vanessa Benelli Mosell who makes her debut at Cadogan Hall, and Elgar’s Enigma Variations, regarded as one of the greatest or...

The RPO is joined by Hilary Davan Wetton, the City of London Choir and two guest soloists for a selection of life-affirming choral and orchestral music by Ravel, Vaughan Williams and Fauré, including the latter's Requiem which embraces rich emotions...

Roman Kosyakov, winner of the Hastings International Piano Concerto Competition, puts his own stamp on Rachmaninov’s passionate Piano Concerto No. 2 before the Orchestra embraces Beethoven’s expansive ‘Pastoral’ Symphony, inspired by his love...

Celebrated pianist Jae-Hyuck Cho performs Rachmaninov’s Piano Concerto No. 3. Brahms’ Symphony No. 2 stands out as one of his greatest musical achievements, while Mozart’s magical Overture to The Marriage of Figaro captures the wonder and wit o...

Begin your festive season in the sparkling surroundings of a decked-out Cadogan Hall with this concert of choral and orchestral Christmas music, featuring the City of London Choir and acclaimed baritone Njabulo Madlala. Enjoy seasonal gems, much-love...

An early evening concert of light summery music awaits you, with Mendelssohn’s Overture to A Midsummer Night's Dream and two works by Beethoven, including his majestic ‘Emperor’ Piano Concerto performed by acclaimed pianist Alexandra Dariescu.
More Info Sold Out