Inspired by his teachers Borodin and Glazunov, the opening concert of the 360° series features Shostakovich and the works that were instrumental in forming the radical Russian composer’s music, presented and conducted by RPO Principal Associate Conductor Alexander Shelley.

Whilst Borodin and Glazunov demonstrate the rich Russian traditions produced in the 19th century, it is perhaps with Shostakovich’s contemporary Prokofiev that comparisons are most readily drawn. Prokofiev enjoyed popularity in his day as a modern, adaptable voice that in works such as his Sinfonia Concertante, written for cello and orchestra, resonates with a unique versatility of tone, expression and technical challenge. Shostakovich’s legacy has taken a different course of a composer heavily affected by political demand. In navigating the harsh realities of the Second World War and appeasement of the Soviet regime came his Symphony No. 9, an abstract expression of hope for a nation ravaged by war.

This concert is preceded by an RPO Prelude at 6.15pm.

RPO Principal Associate Conductor Alexander Shelley presents a new themed 360° series which takes an all-encompassing view of three contrasting composers, revealing their musical influences and how this informed their own unique musical identities. 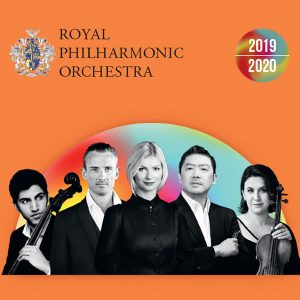 Welcome to the Royal Philharmonic Orchestra’s (RPO) 2019-20 series at our Resident Home of Cadogan Hall. We hope you will join us on a journey through a wide range of orchestral music, brought to you by some of the greatest musicians working today.

In light of the coronavirus outbreak, this performance has been rescheduled, with some changes to the programme, to Sunday 24 October 2021 at 3.30pm. We are doing our utmost to support the national effort in reducing the spread of coronavirus and the...
More Info Book Now